There Are 1 Or Fewer People In The U.S. Named Leonard Natman

Hanging just inside the door of this quiet reception room off BAM's grand lobby, is an oil painting for which the room is named: "The Leonard Natman Room". As though not to interfere with the grandiosity of the BAM spaces, the friendly informal gaze of the person depicted in this painting is oddly antithetical to the characteristic formality of being represented by an oil painting - an oddness magnified by the little I could find out about Natman: Leonard Natman had worked at BAM as house manager, had developed a youth education program during his years here, and had died of AIDS in 1986.

The distinct physical presence of the oil painting, with its subject's unassuming modesty, prompted a search on Google to find out more. I was looking for a prouder image, something that says THIS IS MY ROOM! But my search for Leonard Natman resulted in "0" images. What was I thinking? Natman died in 1986. There was no internet to speak of, and certainly there were no social networks on it.

Leonard Natman's lack of digital presence on the Internet provides the ultimate contrast to the existence of the singular material object representing him at BAM. In its physical insistence, the painting is secure - you can touch it, move it around, it will be where it is until someone physically picks it up and moves it somewhere else. (As far as I know, this painting is not reproduced - you can only view it at BAM.) But in relation to all the ephemeral atomized ubiquitous multiple digital presences online, this painting seems sadly lonely in its immutable material singularity.

In a kind of mournful compulsion to provide my new subject with companionship, I collected the thumbnail images from the 15,000,000 results of a Google image search for "Leonard" (without "Natman"), and printed 100 of them as 8x10 theatrical headshot photos. Some are famous (Leonard Nimoy, Leonard Slatkin, Leonard Bernstein, Leonard Cohen), most are anonymous. Hung across from the painting, Leonards For Leonard is a conversation between the digital Leonards and the oil painting Leonard - the many Leonards keeping Leonard company.

Many Leonards Not Natman, 2009
Installation at Brooklyn Academy of Music, 2009

Installation at Brooklyn Academy of Music, 2009

In 2015 I was invited to be part of the group exhibition ‘DIGITAL_ANALOG.INDIFFERENCE’, at the Kultur Forum in Dresden, Germany. The show was about the influence of digital technologies on our analog world and the curators wanted to replicate the installation of ‘Many Leonards Not Natman’ as it was installed at the Brooklyn Academy of Music in 2009. Unfortunately the oil painting of Leonard Natman that inspired the whole work, could not be transported to Germany due to high shipping costs. We decided to install a webcam to focus on the oil painting at BAM and stream it to a monitor in the exhibition space in Dresden. The point of a live stream was to maintain the connection between the painting and the grid of prints without moving or reproducing the painting. 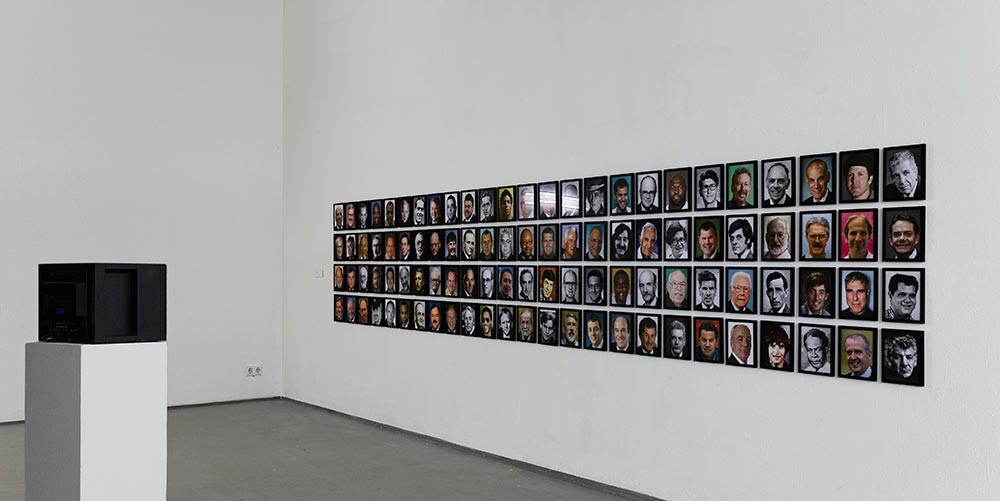 Installation of Many Leonards Not Natman with live stream at Kultur Forum, Dresden, Germany 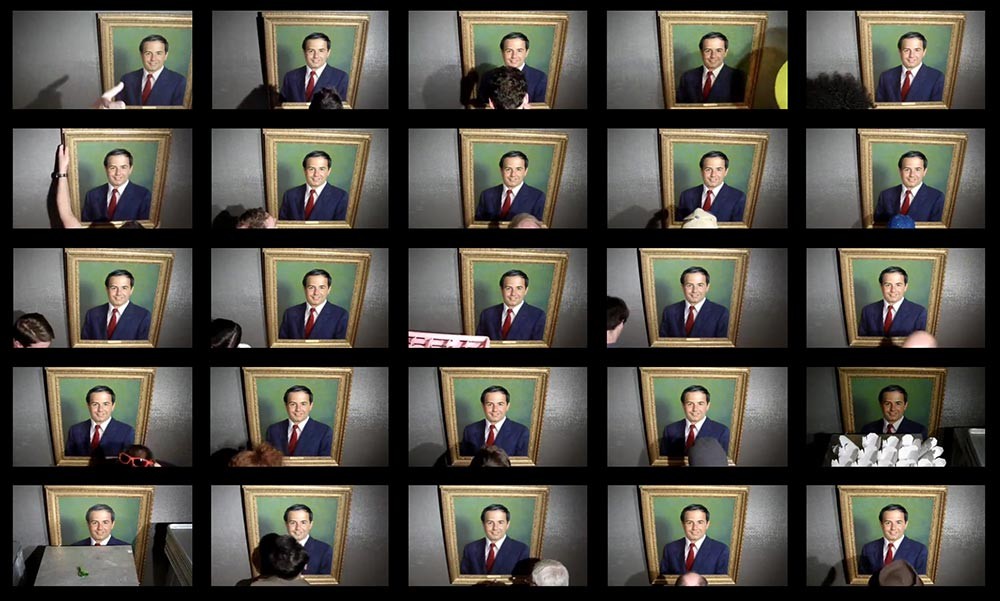 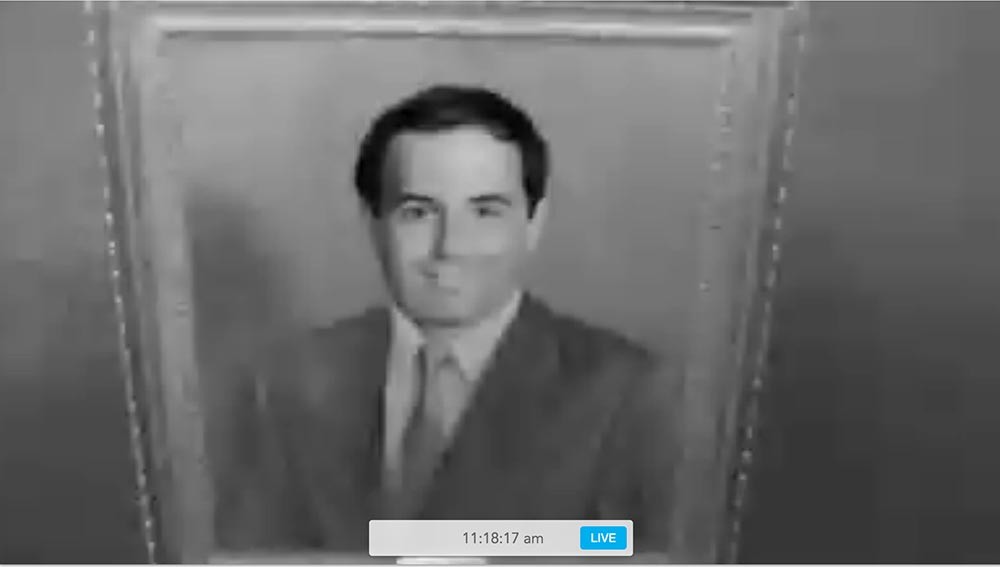 At night when the lights are turned off at BAM, the webcam shift to night-mode using infrared. This means that when the Kultur Forum in Dresden opens in the morning, the image will be streamed in night-mode for approximately six hours until BAM opens in NYC. 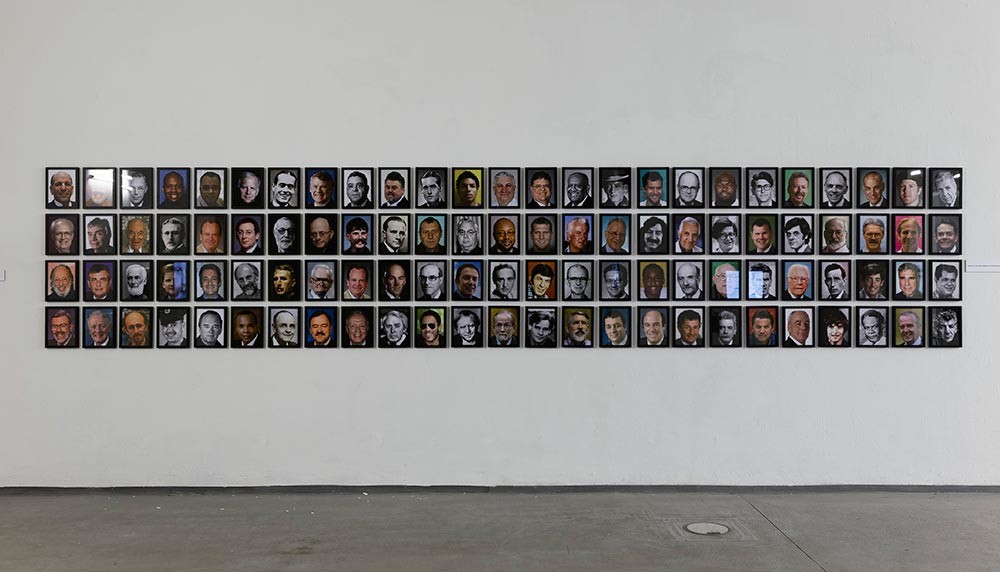 Installation of Many Leonards Not Natman at Kultur Forum, Dresden, Germany